The Great Linocut Adventure, Part One

February 28, 2016
For some time now, I've been wanting to use the RMAC collection to teach printmaking, and this year I finally made it happen. Starting with the monotype show I put together in 2014, I've been focusing on a different printing practice every winter, but this year I also offered a class in conjunction with our latest medium-based show, What a Relief! Block Prints from the RMAC. For this workshop, I combined art history with studio practice to take a closer look at the prints in the gallery, and then try out some of those same techniques in the classroom. 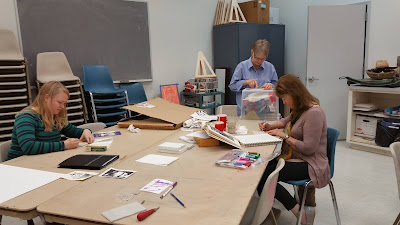 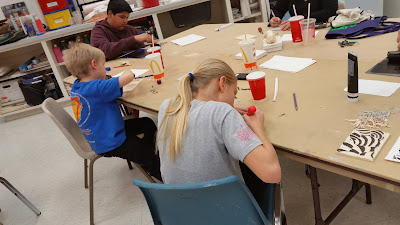 In preparation for this class, as well as to supplement the didactic texts for the exhibit, I decided to make a series of linoleum prints demonstrating four different relief techniques: black-and-white, multi-block, reductive, and white-line. In addition to creating the finished prints, I also included the linoleum blocks and prints in progress in order to show how these works were made. Comparing different techniques is an exercise I've been wanting to try for a while now, but this workshop and exhibit gave me the incentive to actually complete it.

The first step was to choose my image. After perusing my sketches, I settled on a small drawing I did of San Francisco de Asis in Ranchos de Taos.

I initially I didn't plan on using it for anything, but I thought it'd be good to use a recognizable image, allowing students to focus more on the processes I used. It's also easy to distill this particular church into a abstracted, but still representational image, which I felt was important for the workshop. I didn't want my students to take on anything overwhelmingly complex within a two-day period, so I figured I'd better set a good example and keep my work simple as well. I've also been wanting to do something overtly southwestern for a while now; I figured this would be a good opportunity to get it out of my system.


Since the first linocut was going to be black-and-white, I started by making a new drawing that simplified the church down into a black-and-white image.

From there I made a linocut that looked like this: 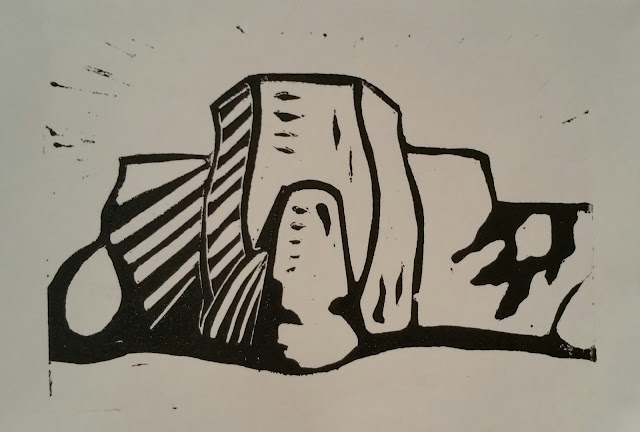 My printmaking adventure had started with a hiccup. The image was competent enough, but I wasn't particularly happy with it. It felt boring.

At first I chalked it up to the fact that I prefer making color prints and ended the conversation there, but then I asked myself why that was the case. After all, I've done plenty of black-and-white drawings and intaglio prints, so why was the linocut any different?

I then realized that this little print was indicative of something I'd done throughout my black-and-white relief work: there was too much outline and not enough shape. When I think of great of black-and-white woodcuts, I immediately recall the northern Renaissance masters of the sixteenth century: Albrecht Duerer, Hans Baldung Grien, and so forth.

The difference between their work and mine is that they were technical masters capable of carving plenty of detail into their prints to define their forms. I don't have that same technical skill because I wasn't apprenticed to master artisans at a young age like they were, so I can't achieve that level of detail. It'd be nice, but come on, let's be realistic.

As a result, while I'd spent a good deal of time carving away the negative space in my piece, the resulting image seemed empty to me because there was no compelling dialogue between positive and negative space. Basically I was trying to make a drawing, but relief printmakers, the successful ones at least, recognize that they aren't drawings, and take advantage of the medium's unique physicality to create bold images. I was so focused on creating black contours to define my composition that I'd ended up making an overly busy, yet still empty composition. I'd forgotten that the reason that people are so drawn to San Francisco de Asis isn't line, but shape.

With this revelation in mind, I decided to redo the print, but not worry about outlines this time. Instead, I would only carve out the white highlights of the church. The rest of it, the sky, the ground, would be printed black. Instead of carving away linoleum to delineate my form, I would let the linoleum itself define the church as much as possible. This method is known as white-line printing, and requires a lot less carving.

First, I drew a new version on tracing paper, coloring in the areas I would carve out in black to create a negative version of the composition. Already I could tell I'd have to do a lot less gouging this time to get the final result. 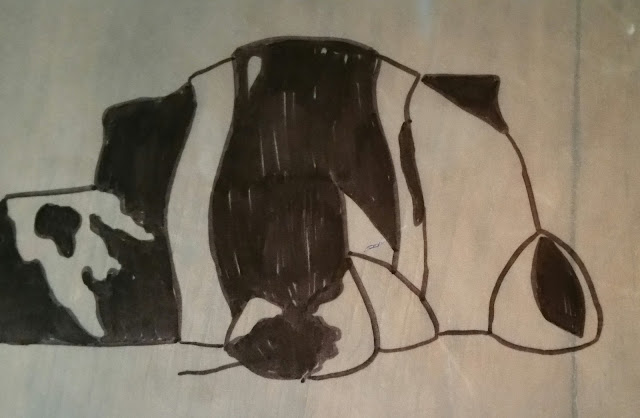 I then put a piece of transfer paper over my linoleum, covered it with the tracing paper, and traced the outlines of the composition, transferring the image to the block. 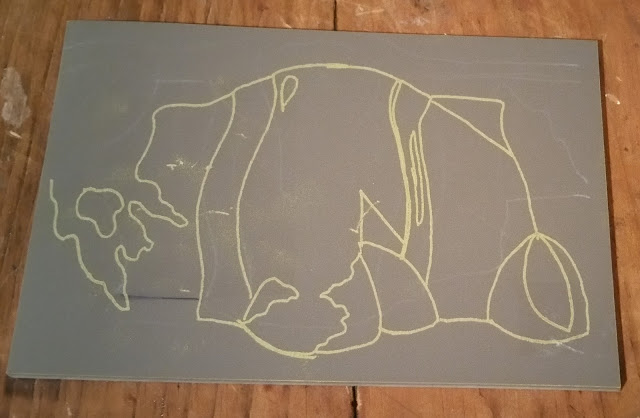 Next, I carved out the areas I'd marked out in black on my tracing paper. 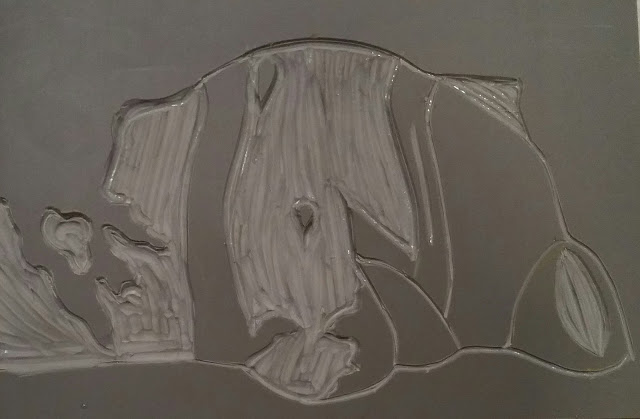 As a comparison, here's what the first block looked like: 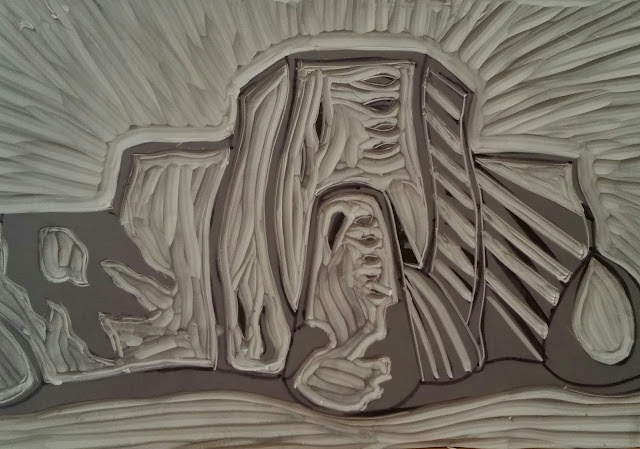 My new version required a lot less carving, and to me more effectively embraced the nature of relief printing and the banter that takes place between positive and negative space.

To ink the block, I used a little roller called a brayer, and covered it in black ink. 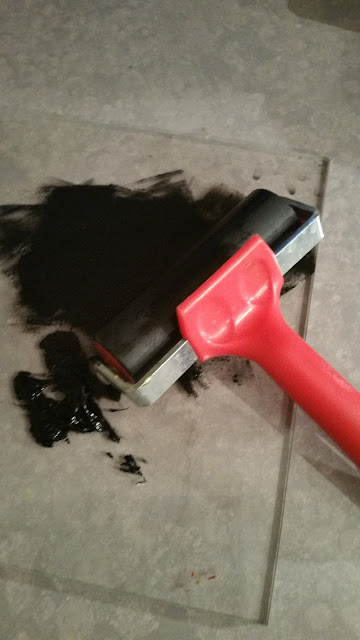 Once I'd inked up, it was time to roll the brayer over the linoleum plate. 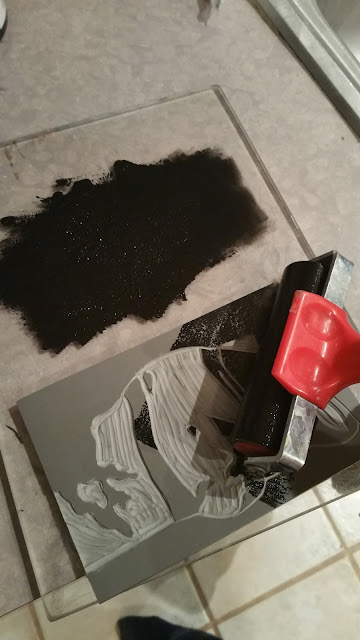 Then I covered the plate with paper, and rubbed it by hand to transfer the ink. 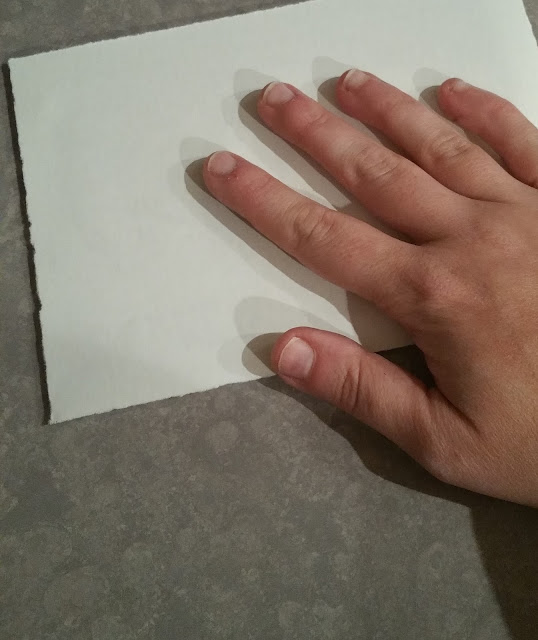 And finally, we get the print itself: 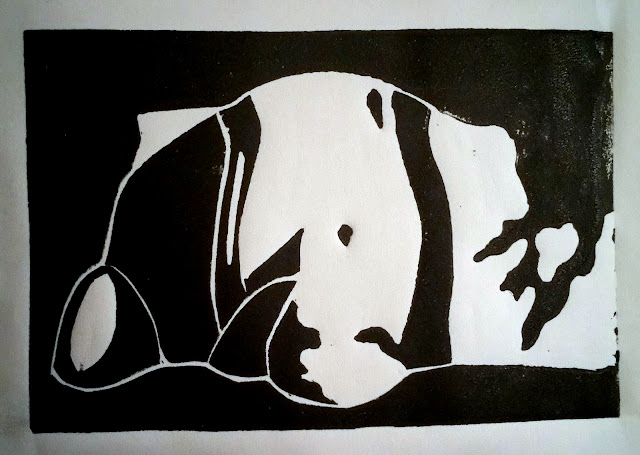 I was much happier with this second version. I feel it much more effectively captures the sense of shape and form that has made San Francisco de Asis so compelling to artists throughout the twentieth century, and I feel I have a much greater respect for black-and-white relief prints as a medium. I tend to be pretty detail-oriented in my drawings, so the simplicity of this work, and the exercise of distilling the church down to the most basic forms of black-and-white, was actually rather refreshing. I've generally always preferred making color prints, but this project has also helped me change my mind about that, as I now know that I can comfortably make black-and-white images. This adventure was turning out to be a beneficial endeavor to not only my students, but to me as an artist.

This is only the beginning of our relief printing journey though, so be sure to stay tuned for more printmaking adventures!