June 19, 2016
I recently downsized into a smaller apartment, which necessitated the purging of material possessions. While burrowing through a massive pile of miscellaneous papers, I found an image of something I'd almost completely forgotten about: 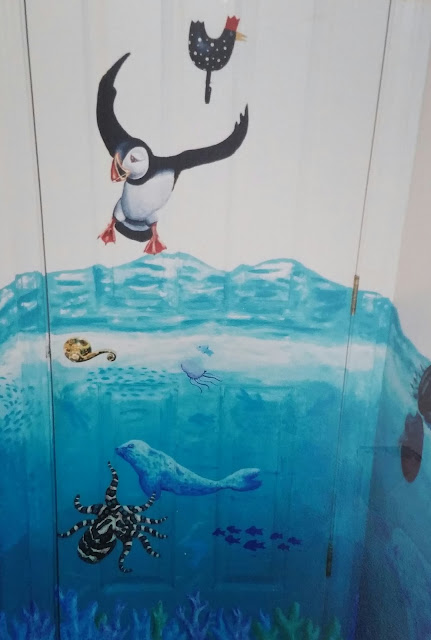 What you're looking at is a mural I painted in my bathroom in 2002. At this time I was a high school kid, sophomore or junior depending on the season, living in Prescott Valley, Arizona. The house my parents owned was a fairly large ranch-style home, and it had two bathrooms. One of these was for my sister and myself, which meant mostly me, since she had moved out after turning 18. Since it was my bathroom, I was free to decorate it as I liked, and in this case it meant painting a mural all along the wall and door.

This was actually the second mural I painted in this space. The first one was done when I was about 13, and also had an oceanic theme, but I was pretty embarrassed by its primitive quality within a couple of years. For this second one, I didn't just paint a few fish, as I had with the first one: I painted an ocean. I distinctly remember being very interested in atmospheric perspective at the time, and using the blues of the paint to suggest depth. For the individual animals, I consulted a massive series of animal books that had belonged to my grandfather, great 1960s encyclopedias repleted with big-color photographs. Geographically this mural is a hodgepodge, as the creatures here come from all over the world, but it was my ocean, and I could put whatever I wanted in it. 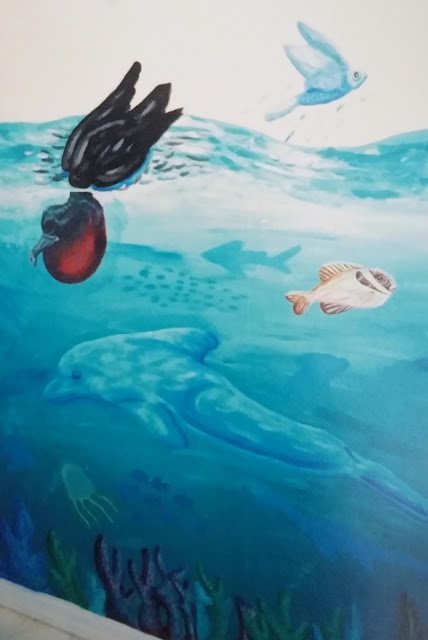 In light of my recent post about my ambivalence toward painting, it might seem strange that I ever painted a mural at all, but I actually did quite a bit of mural-painting when I was in high school. After finishing this oceanic one, my mother asked me paint a desert-themed one in the living room: 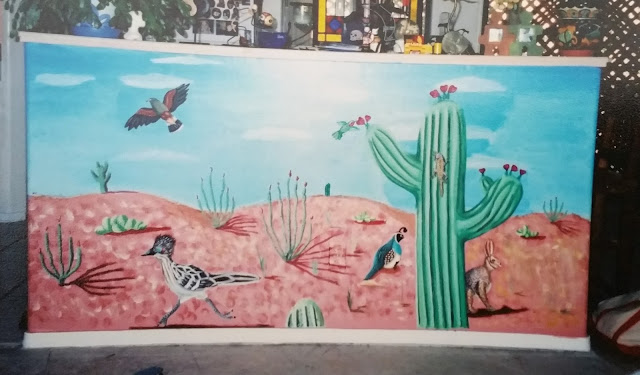 I recall not enjoying working on this one as much, and it shows in my opinion. I didn't really make much of an attempt on suggesting depth, so the result is rather flat and decorative to me. By this time I was starting to look at colleges and seriously considering out-of-state schools, so I wanted to get out of the desert, not celebrate it (yet here I am again, funny how that works out).

I also painted this little number on the pantry doors. The pots were based on examples that my mother owned, as were the plants themselves. The beveled edges on the surface made for tricky painting.

Not all my murals were painted at home, either. During my summers off, I painted several animal-themed vignettes in the bathrooms of Coyote Springs Elementary, where I had once been a student. I only attended this school for a year, as I had spent most of my elementary days in Maine, but I remember the building being full of wonderful paintings along the walls. My neighbor (whose kids also attended the school and were friends of mine) had started painting these different scenes all over the building several years before, and they were very helpful to me in terms of navigation, since all the hallways tended to look the same. When she invited me to paint with her a few years later, it was a gratifying experience, and it felt nice to give back to a school that had helped me feel welcome after relocating from New England to the high desert. 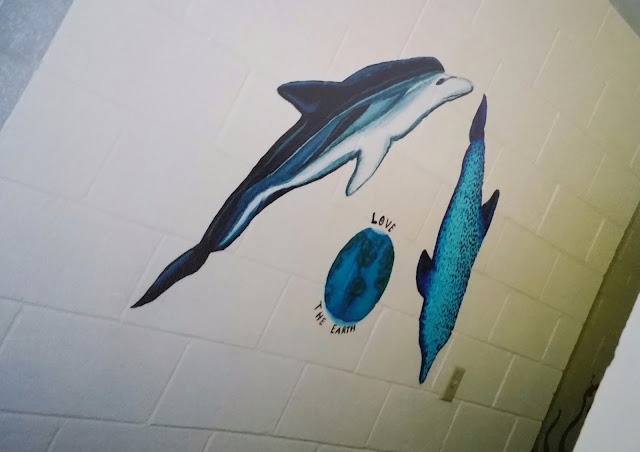 To my knowledge, none of these teenage endeavors exist anymore, at least not visibly. After my parents sold the house in Arizona, the new owners had it completely repainted, and as for the elementary school, the principal there had all of those covered up sometime around 2010, along with everything my neighbor had painted. I wasn't surprised that the house murals got covered, but I'll admit, it hurt at the time to find out they'd painted over the school's art. After all, that was one of the things that I remembered so well about the place. But life goes on, and staying angry forever doesn't do a whole lot of good.

So why don't I paint murals anymore? A lot of it is pragmatic. I'm not a homeowner myself, so painting up the walls isn't really an option for me these days. Time is another reason. I don't come from a wealthy family, but I did have the luxury of not having to work part-time in high school, which gave me the opportunity to explore other interests, such as painting, flute-playing, and visiting museums. Nowadays, I work full-time all year, so it's easier and less costly to work on smaller pieces. My own artistic interests also evolve based on what's available to me. In high school, I had access to empty walls. These days, it's a potter's wheel and etching press.

Beyond pragmatics, though, maturity has also influenced the sort of work I do. I wasn't a braggart in high school, but I definitely possessed an inflated sense of self unique to teenagers. Today I'd consider mural-painting on my part an act of hubris, especially given my reservations toward painting these days, but back then I had that combination of talent and naivete that lets you do anything. Looking at these pictures, it's obvious that I was no Michelangelo, but at the time I thought I was pretty damn good, to put it bluntly.

And to cut myself a little slack, they're not bad at all, I just know I could paint better ones now if I felt so inclined.

If anything, looking at these murals reminds me of how fortunate I am to have the family I do. Throughout my life, I've had parents who heartily supported my artistic endeavors. When I was a little girl growing up in Maine, my dad would bring home huge reams of scrap computer paper from the lumber company he worked at so that I could draw without inhibition. In high school, my mother let me paint all over her walls in an effort to leave some unique, creative mark on the house. During my senior year in college, my parents willingly read my senior thesis on 16th-century German Franciscan altarpieces. Today, they accept that as a museum curator I move wherever the jobs are, which means I can't always be close to home. Yet throughout all of this, they've supported me 100%, and that's made all the difference in terms of what I've done with my life so far, and will continue to do in the future.

So to all the parents out there: support your kids' interests, whether they be artistic, mathematical, musical, scientific, or something else. You never know what may grow from it.