July 17, 2016
I recently moved into a new apartment. It's right next to my old one, so I've still got the convenient location and fantastic landlords, but this place is better suited to my needs in terms of size and layout. 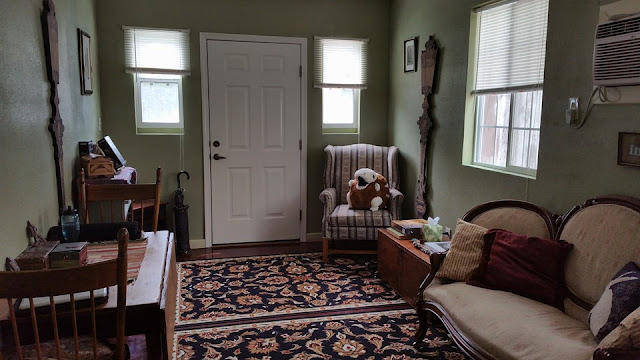 One of the major differences between the two apartments is size; my new home is noticeably smaller, so I had to discard a lot of unwanted detritus in order to move in here. That meant perusing piles of paperwork, books, and other objects that I'd been ignoring for years. Whereas my other apartment had plenty of closets and cubby holes that let me hide things away and more or less forget their existence, there's no room for that in my new home, so I had confront and discard unwanted things once and for all.

This included my college notes. While today I work with southwestern artists of the nineteenth and twentieth centuries, in college I was a Northern Renaissance person. Jan van Eyck, Rogier van der Weyden, and Hans Memling were the guys I hung out with then, and to this day, when I go to an art museum for pleasure, chances are you'll find me in the Northern Ren. galleries. The amount of control these artists exercised over their medium is remarkable, but considering their workshop background, where apprentices would spend years just learning to grind pigments properly, it's expected.


As a sophomore I was particularly interested in late medieval music, and wrote an entire paper on the hierarchy of instruments in the paintings of Hans Memling. In it I talked about how the instruments corresponded to a celestial order, becoming a visual metaphor for the Music of the Spheres. It was also a good excuse to listen to some weird old musical instruments, most notably the tromba marina, second from the left here.

After spending a semester in London and Florence, and visiting a plethora of medieval churches, I became really interested in Franciscan art, and spent my senior year writing a thesis about a 16th-century Franciscan polyptych painted in Cologne. I became obsessed with the piece, and when I finally got to see it at the Wallraf-Richartz Museum a few years later, I was extremely excited, to say the least. For a time, the Northern Renaissance was a very important part of my intellectual life and identity.

But not so much anymore. Going through my notes, I realized I hadn't looked at them in years, and I knew I probably wouldn't in the future either. My interests are different now, and what I studied in 2005 isn't the same in 2015. My world now is the American Southwest with all its characters, and who knows what it will be in another ten years.

And you know what? That's okay. Our interests and priorities are bound to evolve over the course of a lifetime, and what we were into ten, five, even a year ago won't necessarily be the same. Nor does our ongoing love for a particular subject or interest have to be all-consuming. I never did achieve my childhood ambition of becoming a paleontologist, but I still enjoy dinosaurs. Likewise, I still appreciate my van Eycks and van der Weydens, but I don't need to haul around my old college notes to prove it.

So I put my notes in my car, drove them to one of the recycling bins in town, and tossed them in. After moving so many times, any sentiment I had for them was long gone. Let them be reincarnated as new paper for someone else to write their notes and dreams on. They'll be much more useful that way.