December 10, 2017
With the holiday season on us again, I've been mailing out my latest handmade card. For the last three years I've been making Christmas cards using intaglio methods, resulting in prints that resemble little drawings. While I enjoyed making all of these cards, I thought they might be getting a little too formulaic, so this year I decided to make my first linocut card since 2013. For the subject matter, I took inspiration from Los Poblanos, a place I discovered earlier this year and absolutely love. Initially I started out sketching the silos there, but eventually focused on what brought me there in the first place: the Peter Hurd fresco. 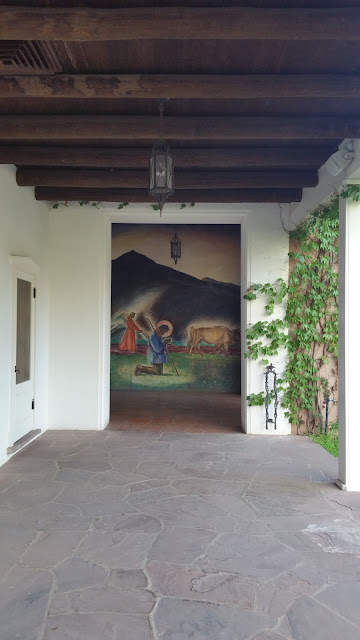 Painted in 1937, this is Hurd's first true fresco, and depicts the legend of San Ysidro, a farmer who was so devout that an angel tended his fields while he prayed. He's a popular figure within the New Mexico Catholic tradition, so it makes sense that Hurd would paint it, given his lifelong affinity with New Mexico's Hispanic culture. With the Wyeth/Hurd retrospective opening in Doylestown next month, it seemed appropriate to pay homage to the project that's defined much of my work over the last three years. 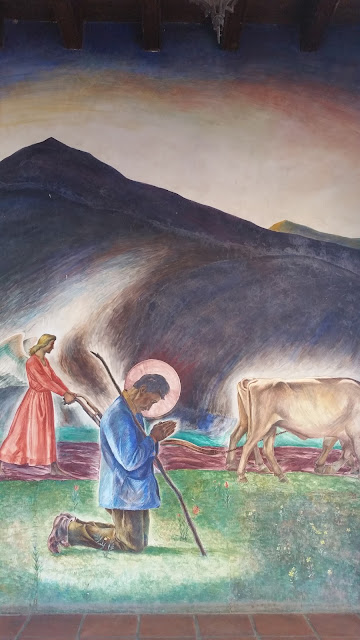 Rather than sketch the whole fresco, I decided to focus on a detail and abstract it into a more simplified form that would read well as a one-color linocut. Initially I started sketching San Ysidro himself, but eventually settled on one of the oxen being led by the  angel. What can I say, I love animals, and felt it nicely referenced the iconography of the Nativity without being too overt about it (not to mention St. Luke, who is traditionally represented by an ox). I'm not a religious person, but I'm certainly familiar with Christian imagery, given that I was baptized Catholic, not to mention the  medieval and Renaissance art history I studied in college. 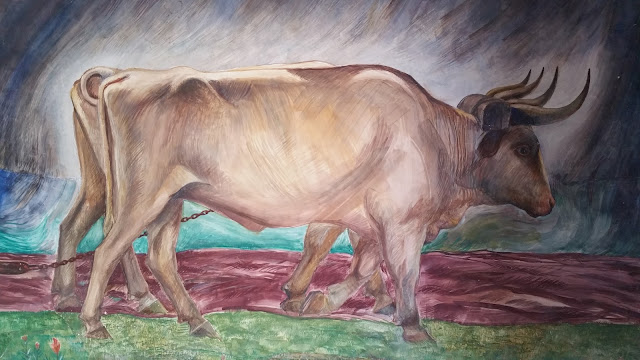 After I had abstracted the ox, I drew it onto my block using tracing paper. I made sure to draw it in reverse, knowing the final print would be flipped. From there, it was on to carving. Remembering the lessons from my last major linocut endeavor, I left the background solid. 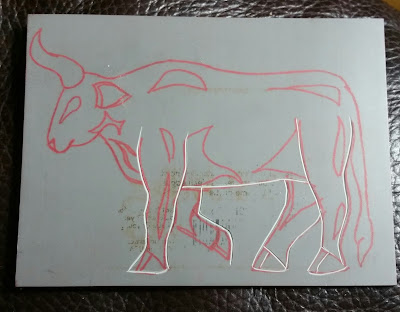 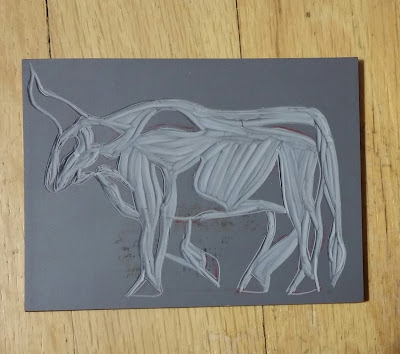 After carving, I did a couple of test prints so that I could clean up any extra bits that showed up in the print. 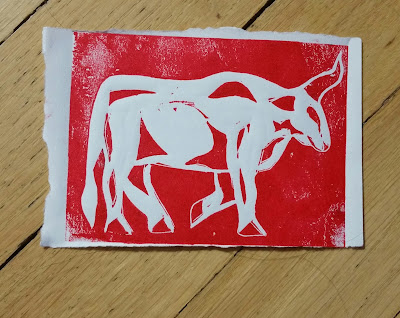 Now it was time for printing. Rather than print in black, I had decided to print in red and green. Initially I was going to print half of the batch in red and the other in green, but then my boyfriend suggested that I print each impression with both colors, reminding me that "Christmas," is a New Mexican colloquialism for wanting both red and green chile on your food. I don't print two colors simultaneously often, but I liked to idea and figured it was worth a shot. 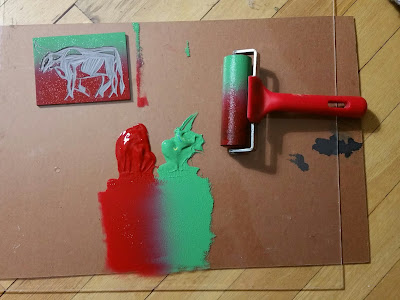 I began by preparing the inks. I only have the primary colors in my arsenal, so I had to mix the green myself. I placed the inks side by side, and rolled them both out on my roller. I then rolled it out onto the block and covered that with paper. For the last few years I've been using a white bamboo paper, but this time I decided to use some of my cream Rives paper since I have a good supply of it on hand right now.

After rubbing the paper, I lifted it off the block and saw this: 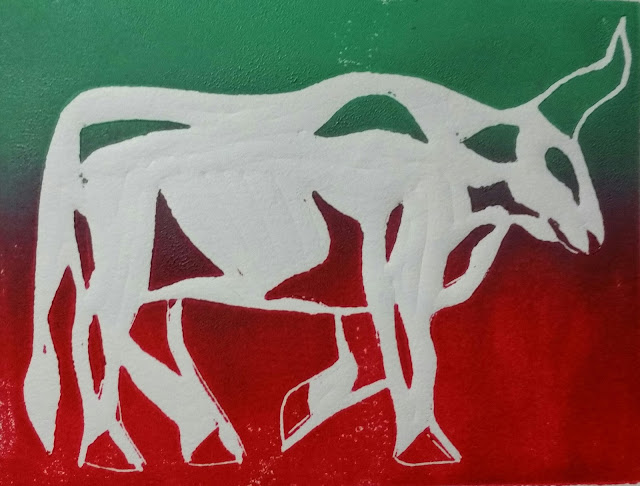 I was excited to see how well it turned out. After I showed my boyfriend, he asked whether I could print the colors in different directions for even more variety. I did, and wound up with these patterns: 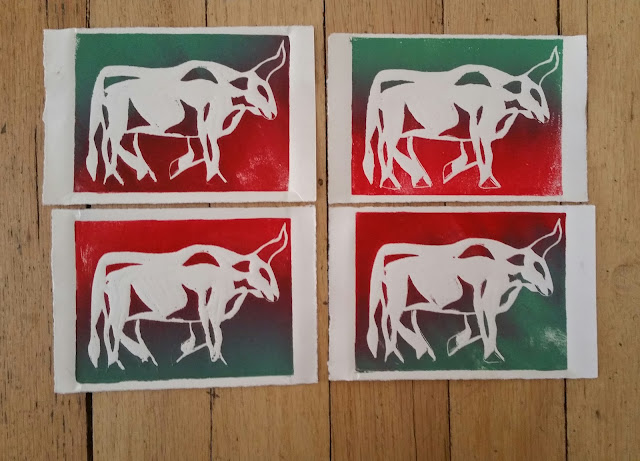 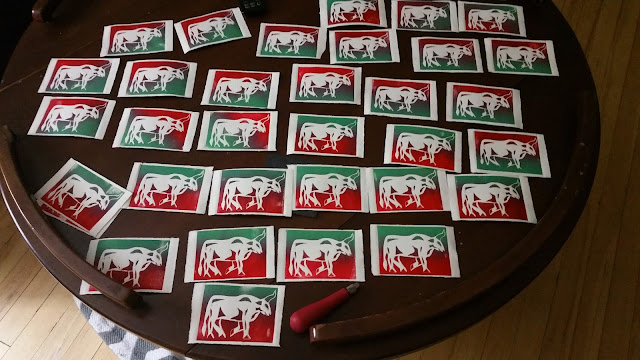 From there, I pasted them onto some blank cards. Rather than white, I ordered red and green cards, playing up the New Mexican chili pun even more: 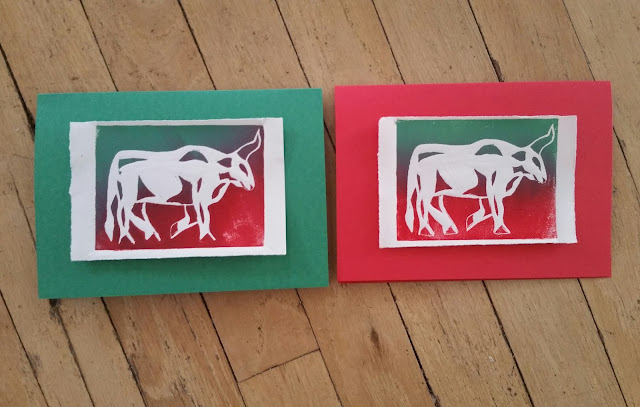 Finally, I had myself a batch of cards that looked like this: 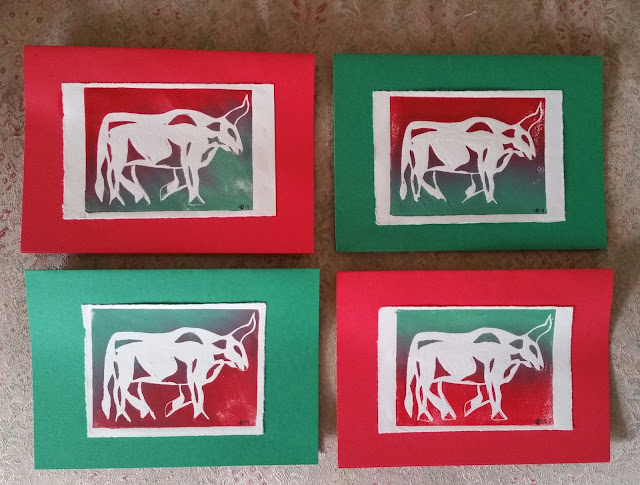 I have to say, this is easily the most colorful card I've ever done, and I'm pretty happy with the results. After years of more muted cards, I welcome the change of pace this card has brought to my holiday portfolio. I don't know if I'll go with the overtly Christmas-oriented color scheme every year, but it definitely worked here, given the simplicity of the design and its strong New Mexico associations, and hopefully it will bring some welcome color and holiday spirit to those who receive it. 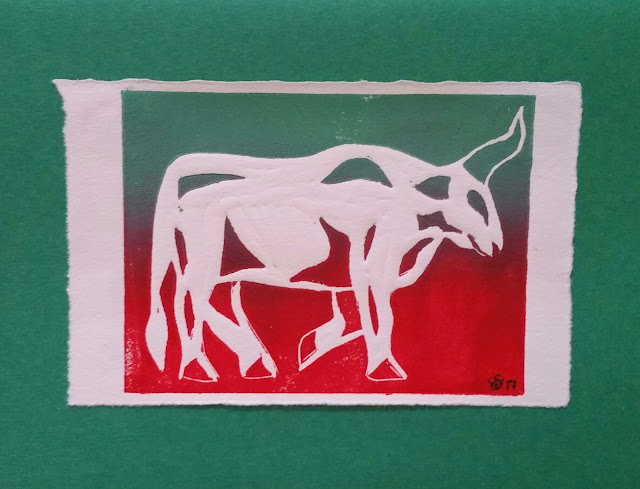