February 18, 2018
Last week I had talked about making a new print based on some older sketches I'd done of the silo in downtown Roswell. Here is what that print initially looked like: 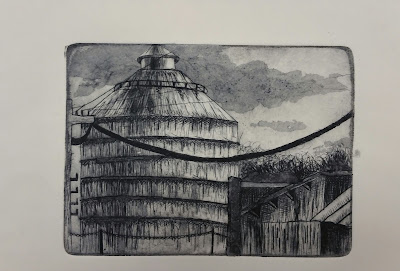 While it certainly captured the aged, rusted appearance of the building, I wasn't finished with the print yet because there was another quality I wanted to explore: the passage of time in my own life. The way to do that, I felt, was through color.


The most immediate inspiration for my decision to use color is a painting currently on view in the exhibition Pennsylvania Impressionists. It was painted by an artist named Fern Coppedge, who was known for her highly vibrant, individual use of color in her works. I really admire her fearless way of incorporating bright hues into her work, and wanted to do something similarly.


There was a second, more overarching reason for wanting to use color, however, and that related back to my own work. Between 2014 and 2015, I did a series of studies of the colors I observed in New Mexico during different seasons, whether they manifested through vegetation, atmospheric effects, or other natural phenomena. Though drawn all over the state, most of them were based on events I'd seen right in Roswell, from winter dusks to springtime flowers. Over a year's time, I did more than one hundred of what I ended up calling my color block studies, and while I didn't do anything with them immediately afterwards, I always had the intention of doing so in the future. Last year, I began working toward this in earnest when I photographed them all individually and uploaded them to my computer so I could finally see them all at once.


Here are a few of the individual blocks: 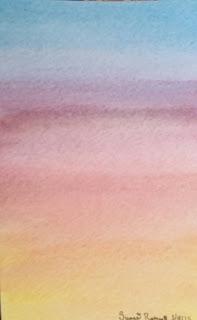 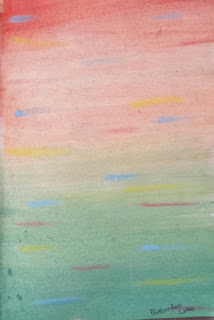 Looking back to the silo print, I wanted to emphasize its significance to my daily life in Roswell. Having lived here longer than anywhere else as an adult, I've been finding myself reflecting a great deal on the passage of time, and the quiet ways in which mundane, everyday events gradually weave a greater tapestry of lived experiences. For more than four years, the silo has been a part of my daily sight line as I've walked to and from my job at the Museum. I've been watching it every day in all four seasons, quietly noting both the sameness and the change that characterizes my commute. When taken individually, my days appear more or less the same, yet there are always subtle differences in weather, light conditions, and season that make it each one slightly different. In this way, my commute has been a commentary on the unfolding of history itself, with the seemingly trivial but individual changes distinguishing my daily commute to work marking the passage of time. I'd already explored this idea somewhat in my feather cyanotypes, but this iteration would be more overt.

Having decided to incorporate color into my prints, I went through all my blocks and settled on nine different studies, one for each of the impressions I'd made. I knew I didn't want to colorize the entire print, so I decided to color the sky only to order to heighten the contrast with the black-and-white silo. With this in mind, I made a point of selecting sunsets, as these were the colors I would have seen around the silo. The studies I picked were done between December 2014 and March 2015, when dusk colors are particularly pronounced in Roswell.


For these particular prints, I opted for watercolor pencils rather than paint so that I would have minimal warping in the paper. After I colored it in, I went over the sky with a lightly watered brush to further saturate the hues. On the bottom of each print, I wrote the date of the color study I had done to underscore the progression of time. After the prints had dried, I went in with a micronpen and drew in the telephone lines, bringing back the visual element that had attracted me to this scene in the first place.

Here is the finished group of prints: 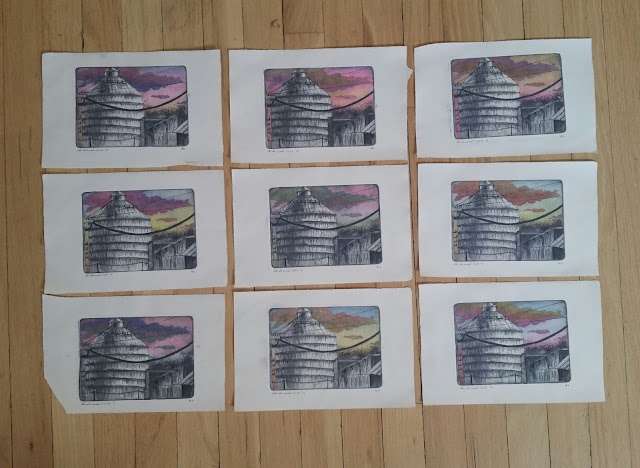 And here are a few of the individual prints: 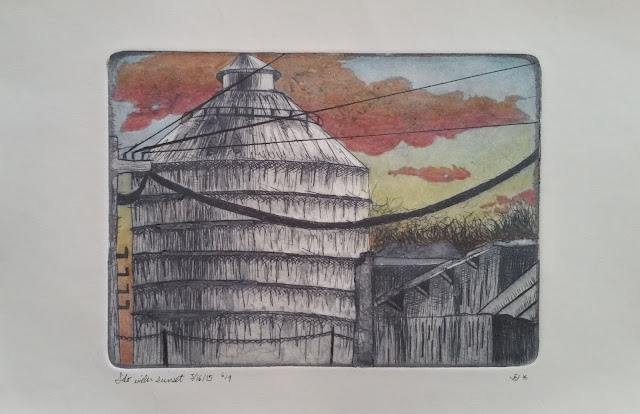 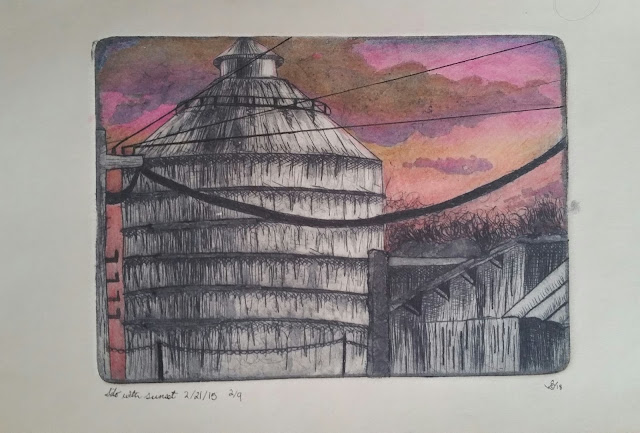 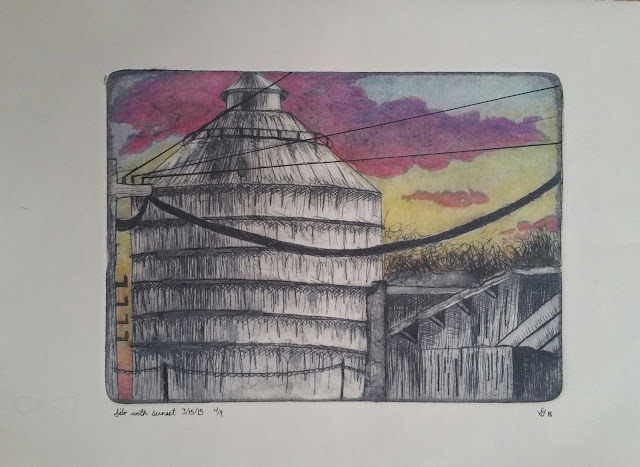 This project was especially satisfying to complete. After years of more or less ignoring these ideas, it was really gratifying to finally be able to do something with them. Then again, I don't know if I could have done anything with the silo and color studies before now. Since the passage of time and the unfolding of history is so important to these works, I really needed to live here in town long enough for those ideas to really sink in, and for me to appreciate those concepts. Now that I've finished these though, I'm ready to go back to some other earlier ideas and bring them to fruition.