April 22, 2018
Like a lot of people, I am, as the saying goes, a creature of habit. Take my commute to work, for instance. Nearly every day for almost five years, I have walked down this tree-lined section of North Pennsylvania Avenue to get to the Museum: 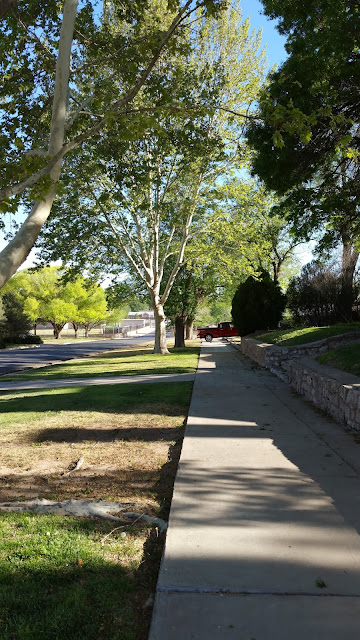 It's a nice walk replete with charming little houses and mature trees, including sycamores, one of my favorites. While I've always appreciated this walk for its relative quiet and pleasant scenery, over the last few months I've been paying greater attention to it, taking note of the subtle changes that occur throughout the seasons. As I've mentioned before, the passage of time through seemingly imperceptible change has been of great interest to me lately, in large part because I've lived long enough in Roswell to really notice it. And what better way to observe these changes, than in watching trees such as this one: 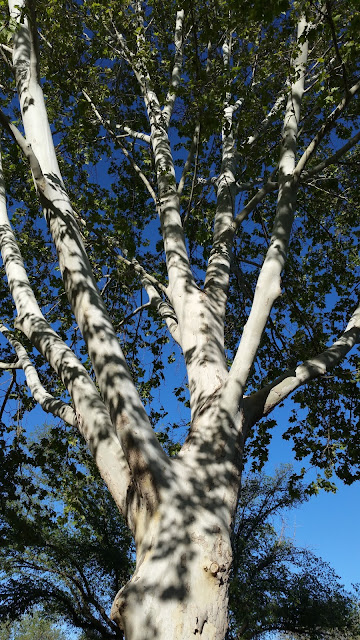 This sycamore has been making occasional appearances in my work for a few years now. I first sketched it during the fall of 2013, when the weather had cooled down enough for me to comfortably draw in the afternoon. In retrospect, this first sketch reminds me of some of B.J.O. Nordfeldt's landscapes from the 1920s and 1930s, particularly the work he did in watercolor. 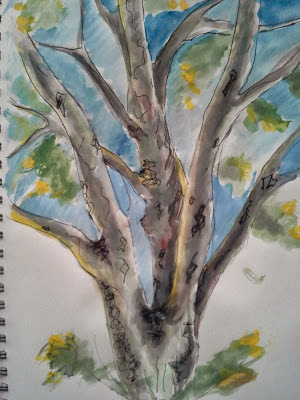 I'd already used the sketch for at least one print, specifically a linocut with a background covered in foil. I had forgotten to reverse the print, hence why it appears backwards here, but it was still a fun project and the resulting work was fine. 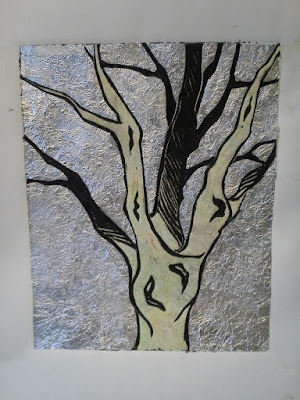 Despite the relative success of that print, however, I'd always been curious to see how the sycamore would look as an intaglio. Whereas block printing is a subtractive process that tends to minimize detail, intaglio is an additive approach that lends itself to meticulous work. One isn't better than the other, they're just different processes that yield different results. 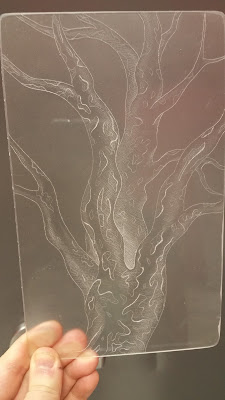 In February, then, I decided to finally make the intaglio version of the sycamore tree. Since a lot of my recent work has been focusing on my everyday experiences, commemorating the tree that I walk by on a daily basis, usually four times a day because I go home for lunch, seemed like an appropriate continuation of that artistic exploration. 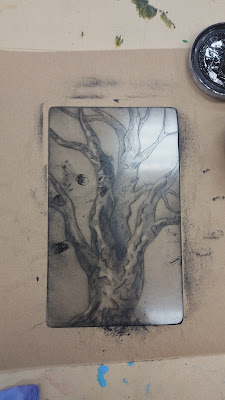 Whereas a lot of my recent intaglio prints have been incorporating elements of collagraphy, I restricted this piece to line work this time around. I made a point, however, of varying my line quality, from deep, gouging lines to demarcate mottled bark, to delicate hatchwork for modeling. 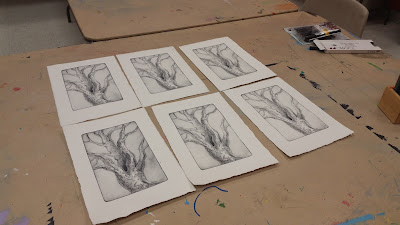 I printed six impressions this time around. I only had a few sheets of BFK Rives left in this particular size, so that largely determined the number of prints I would make. I also tend to keep my editions small since I often like to work with the prints after I've made them, as would be the case with this work.

Here's what the initial print looked like. The shape and modeling reminds me a little of Andrew Wyeth's Sycamore Tree and Hunter, though in this instance the perspective is reversed. 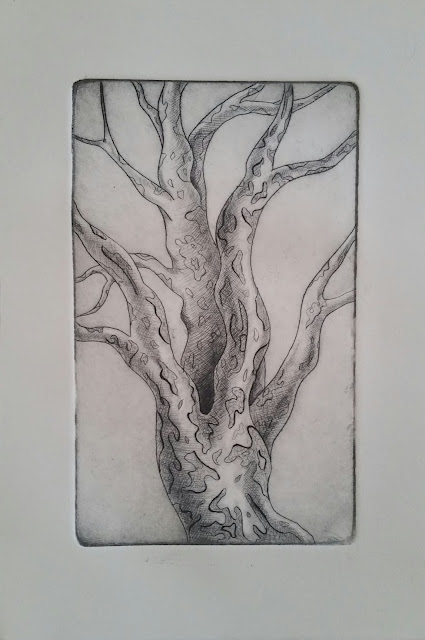 I could have stopped here, but taking inspiration from the silo prints I had finished recently, I looked through my group of color block studies and added color to the background. Like those prints, each color scheme is based on a sunset I've observed in Roswell in different seasons, further bolstering both the local nature of my subject matter and the passage of time as experienced through seemingly mundane routines such as commuting to work. 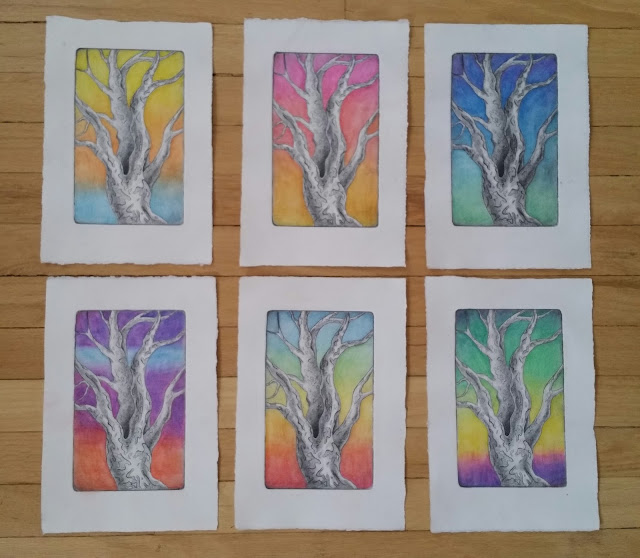 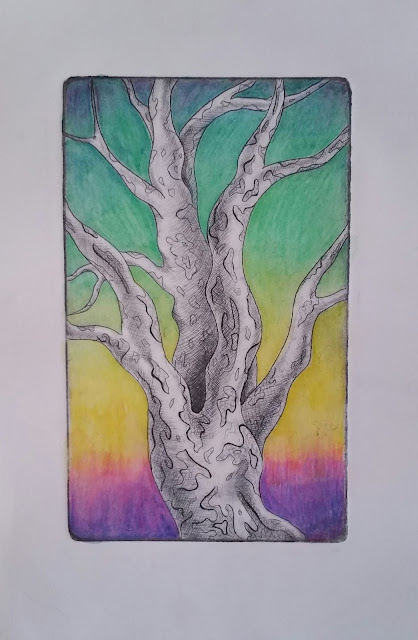 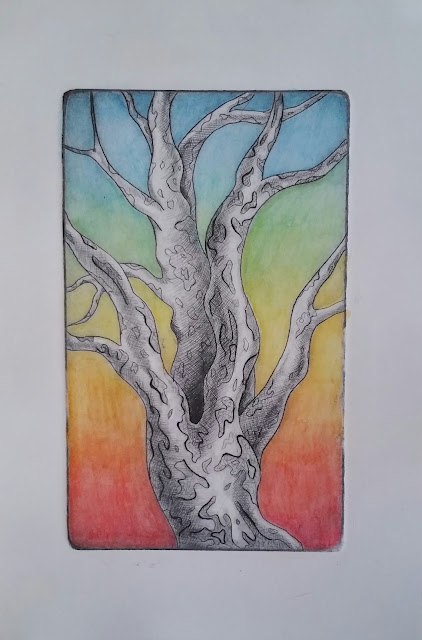 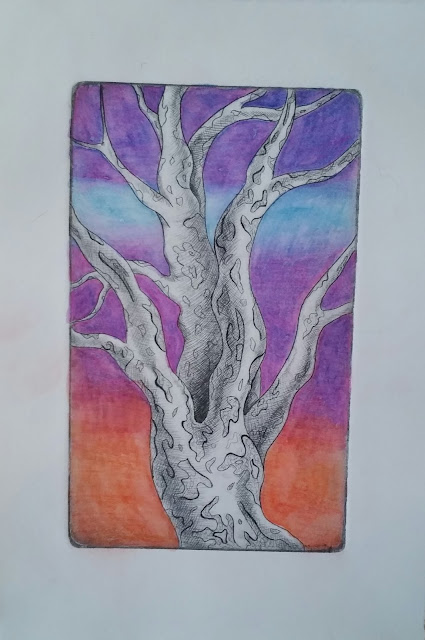 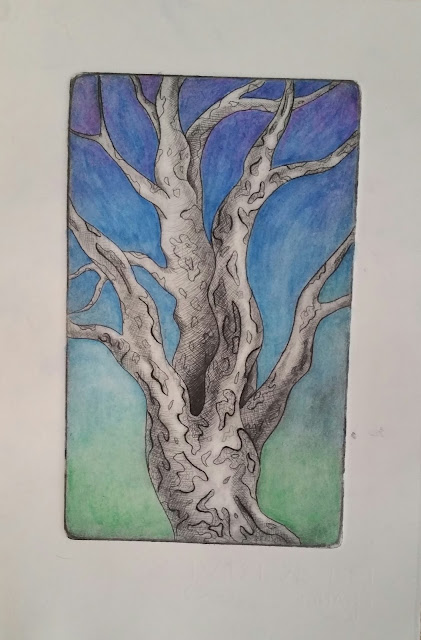 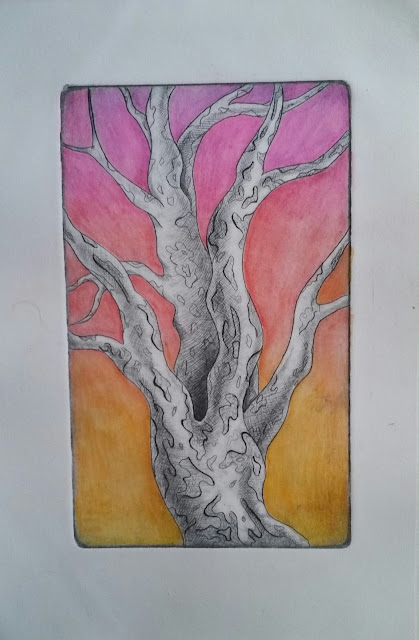 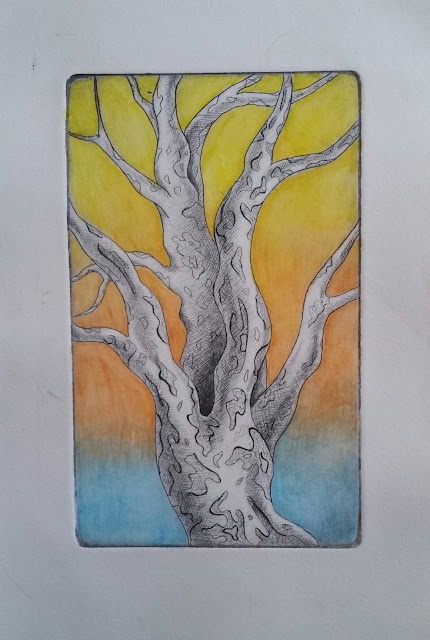 Overall I think these turned out well enough, but I have grander plans for this plate. I'm not yet finished with my exploration of mundane time travel, so stay tuned.